Yet another busy weekend at the Reynolds household. Shaling participated in the first ever Junior Miss Rochester Pageant (she didn't place, but for a girl who didn't speak any English 2 1/2 years ago, she did awesome). Preston wrapped up a week at U of I for music camp with a concert at Krannert Art Center. Here are some pictures and videos. 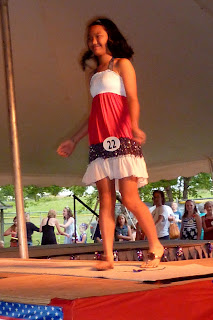 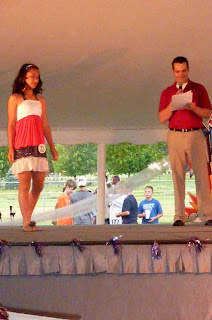 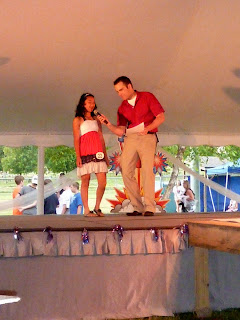 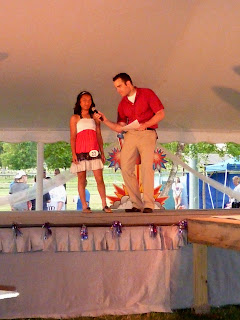 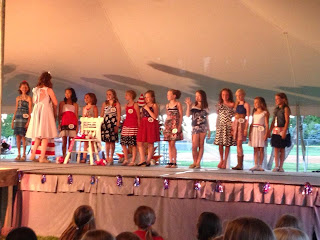 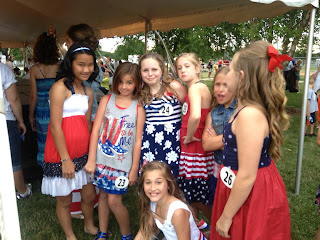 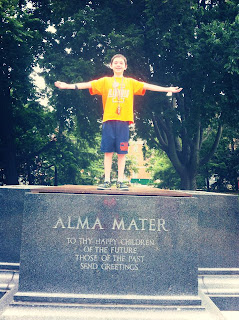 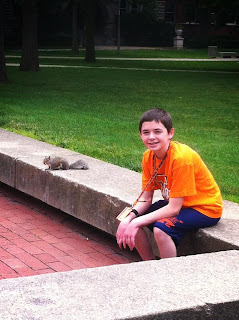 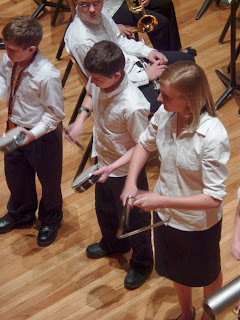 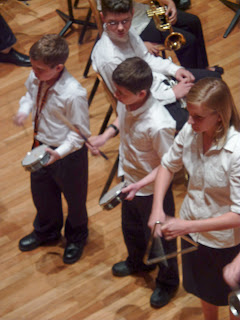 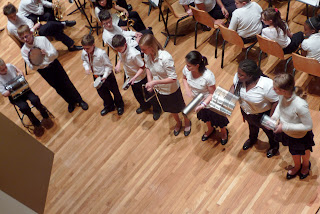 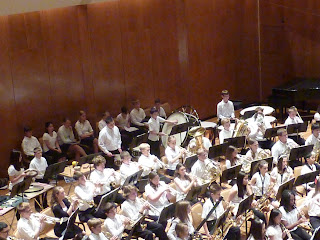 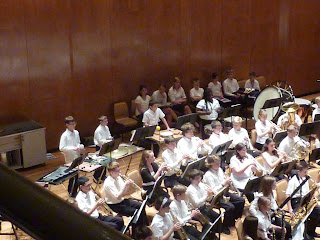 Shaling walks on stage and then answers her question from the emcee during the first annual Rochester Junior Miss Pageant.

There was an overabundance of percussionists at this year's ISYM, so to keep things special for all of them, the powers-that-be brought in a percussion specialist who taught them a samba-style piece that they performed during the concert to wrap-up their week at ISYM. Preston is playing a small, hand-held drum a bit smaller than a tambourine. He is on the left, fifth from the end of the horseshoe shape. He actually has a BRIEF solo at about the 1:40 mark. The videographer (Brock) could have held the camera a bit steadier, and we get a great shot of his hand at one point, but I truly appreciate his efforts, as he hurried over to get in a better position to record this -- our seats didn't have the best of view.


Preston - Samba piece with the World Junior Percussion Ensemble from Amy Reynolds on Vimeo.
Posted by Unknown at 4:43 PM No comments: Links to this post

Lord help me, this girl's strong will is going to do me in. Last week, she attended basketball camp at Rochester High School. This week, she is going to basketball camp at Lincoln Land Community College. We are paying our neighbor, Erin, to shuttle her back and forth so we don't have to take off work. I found out last Friday that every single day last week, Shaling talked Erin into taking her out for ice cream after camp. That was not part of the agreed upon deal. Not that I really care about the ice cream; I am sure Shaling MORE than burned off the calories during camp. Plus, she is not a good milk drinker, so the calcium is a benefit.

However, I would like Shaling to learn proper etiquette -- if someone offers to buy you something, it's ok to say "yes, please", "no, thank you", or "yes, thank you." I am trying to convince her that it is rude to flat out ask. So, I explained this the best I could and her response was, "but, I like ice cream." Duh. Stupid Mom. Of course, I went on to explain that is beside the point.

So, fast forward to today. Erin picks Shaling up from basketball camp. Shaling borrows Erin's phone. She calls ME to ask, "Mom, can I have ice cream?"
Color me stupified.

For those of you not on Facebook, you might get an even better kick out of this conversation Shaling had with Erin. Erin is in her early 20s and has a steady boyfriend, Nick. Nick is currently serving our country in Afghanistan and Erin explained to Shaling that he is not coming home until November. Shaling responded, "It's good to have a boyfriend, but you should also have another boy to have a crush on in case you get tired of waiting or you break up." Yes, God; my 11-year-old, with just under 2.5 years in America, has already figured out the "back-up plan". Please keep your arms wrapped around both of us.

Back to basketball -- Shaling has spent the last two weekends participating in basketball tournaments. Her team is relatively raw compared to most of the competition and have gone 4-6 in 10 games, but we have seen growth in every game. She is having a blast playing and is actively listening, striving to get better, and it shows!
Posted by Unknown at 12:53 PM 1 comment: Links to this post

Congratulations to Preston! At today's 7th grade awards assembly, he was recognized for making honor roll all 4 quarters and earning a "I" rating for his snare drum solo at the February solo & ensemble contest. We were expecting those recognitions, but we were pleasantly surprised and mega-proud when he was presented with an award for being the most outstanding 7th grade jazz band musician. He was asked to switch from drum set to bells this year and he tackled it well. I am so pleased to see him rewarded for his efforts. We are also blessed to have an amazing Fine Arts staff at Rochester that works very hard to get all they can from the students. 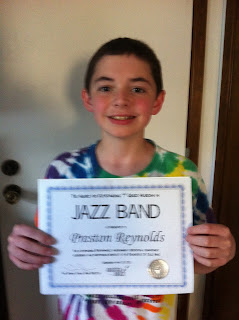 Posted by Unknown at 4:31 PM No comments: Links to this post

I've got some fabulous pictures to share, thanks to another adoptive parent, who shared the following article: Here's What Shenzhen, China Looked Like Just Before Becoming One Of The Most Important Cities In The World. I've written about ShenZhen before (Shenzhen: Fishing Village to Major Port), but I never ceased to be amazed by it's growth. According to this, the population around 1980 was roughly 30,000. However, about that time, China designated it a Special Economic Zone, freeing it from much of the Communist rules that the rest of the country has to follow in terms of private business growth. The city has taken off ever since, and the most recent figures provide a population estimate of 12,000,000.

Here are 5 random pictures from the article I linked above (all taken in 1980): And now, compare those to the following (also taken from that article): And this (taken from my own blog): 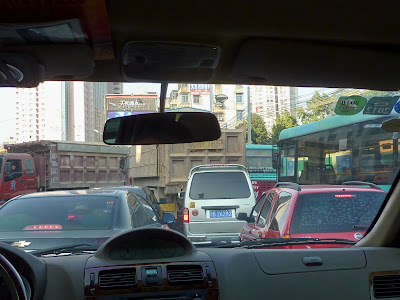 Or, better yet, watch this 48 second video that shows a better look at the gridlock we found ourselves stuck in for two-plus hours:

Gridlock from Amy Reynolds on Vimeo.

I read that the population density in ShenZhen is at 6,620 people (per square mile).  Can you imagine just how strange it must have been for Shaling to arrive here and see such wide expanses of single-family homes?!?

Finally, just a bit off topic, but while searching for the gridlock video to share, I stumbled across this one as well. Shaling and Natalie (who was adopted to a family in Florida the same day we got Shaling) are chattering away in Chinese. While I wouldn't trade being able to converse with Shaling, I am nostalgic for those days of hearing her rattle off in Chinese like this. Shaling is the one in the green jacket (on the right):

More Gridlock from Brock Reynolds on Vimeo.
Posted by Unknown at 9:10 AM No comments: Links to this post

When Shaling first started school at Rochester, she was given an English proficiency exam to determine her need for E.L.L. (English Language Learner) services. That was in January 2011. Each January since, she has been given the test again to gauge her progress. Even though she takes the test in January, we (and the school) don't receive the scores until May (the test is sent off to be scored somewhere else).

This year, the day of the test was not a good day for Shaling. For deeply personal reasons, she was intensely distracted. The teacher (Mrs. Bivens) warned me at the time that this probably affected Shaling's scores. Based on Shaling's results (which you can see below), I believe that her Listening score was definitely affected, but I'm not concerned at all, because I find her other scores to be outstanding. 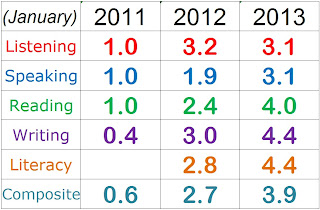 Her score jumps are mighty impressive to me. In order to "graduate" from E.L.L. services, she will need at least a 4.2 for Literacy (which she has already reached) and a Composite score of 4.8 (she is at 3.9). Not bad for only two years into learning the language. Way to go, girl!
Posted by Unknown at 9:36 AM No comments: Links to this post

When describing Shaling's growth to people, I have been telling them that in just over two years, she's grown roughly 10 inches or more. I've often showed them the following two pictures (which I keep on my phone) for comparison. The first one was taken on Gotcha Day (the day we got her), December 27, 2010. The second one was taken in February of this year -- just over two years later. Check out how Preston towers over her in the first one and how much that has changed by the second one. 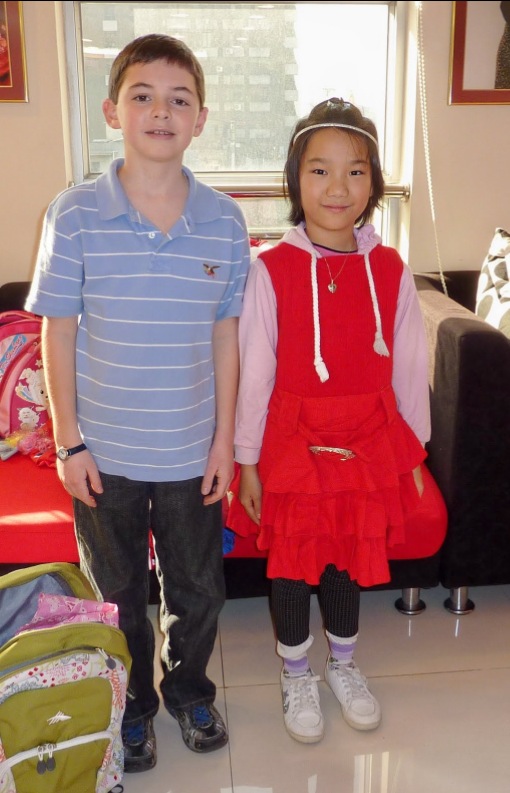 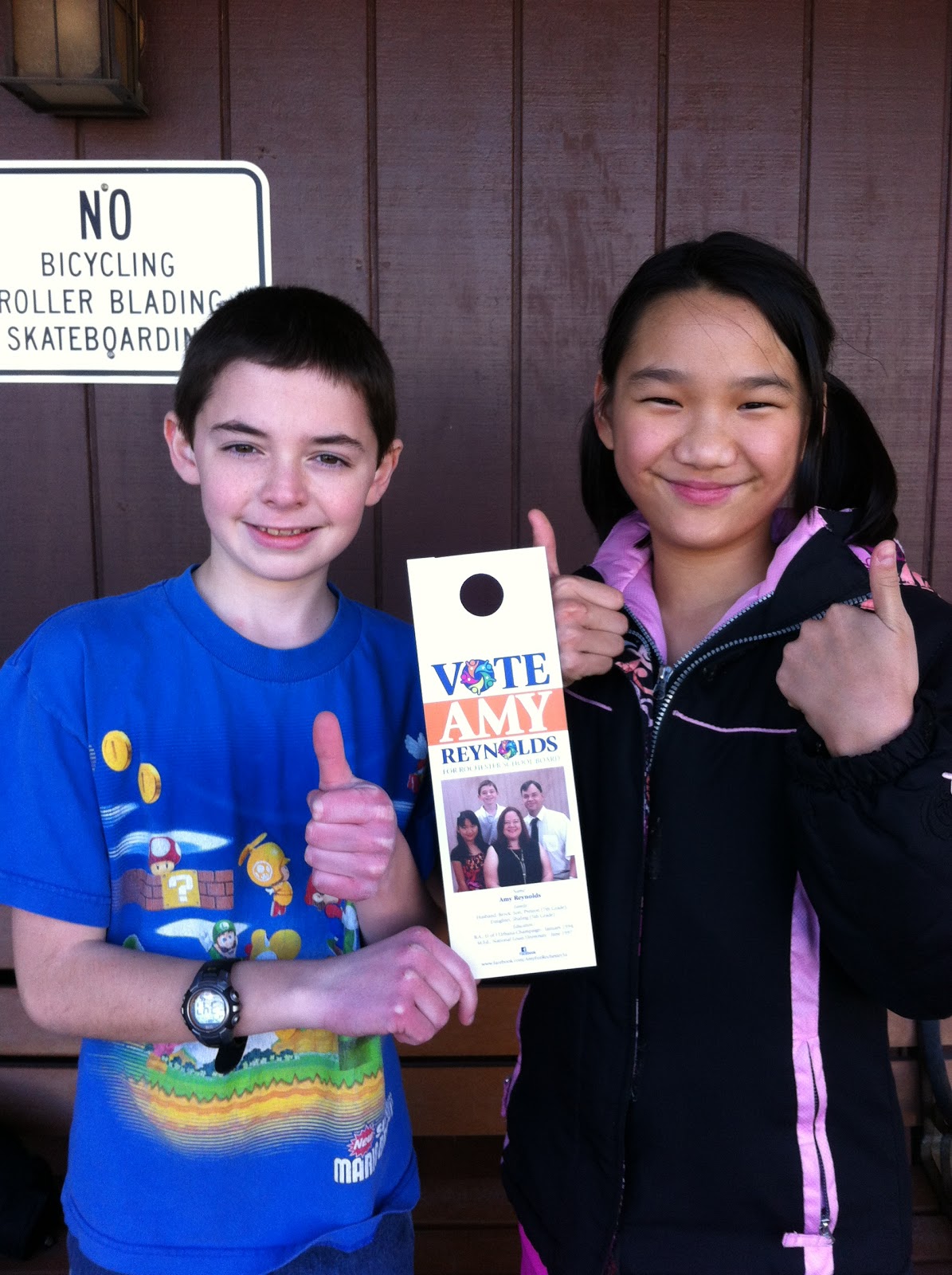 Well, now I have some numbers to back my estimate up. In this blog post from New Year's Day 2011, Shaling went to the doctor in China for a physical before we could bring her to America. I included this picture, which shows her standing on a scale: 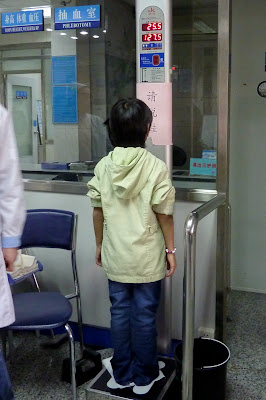 She weighed 25.5 kilograms, which converts to roughly 56 pounds, and stood 127.5 centimeters tall, which converts to roughly 50 inches. Yesterday, I had the kids stand in front of a measuring strip by the door at Steak & Shake. Shaling is now WELL over 5 feet tall (60.5 inches), so my 10-inch to  a foot taller estimate was pretty accurate. Shaling neglected to smile, so the picture isn't very good, and she made me promise not to post it, so I won't. At home, I had her stand on the scale before bedtime and according to that scale, she now weighs 91 pounds. The girl knows how to eat!
Posted by Unknown at 12:45 PM 2 comments: Links to this post

Yesterday, Shaling was one of five girls who tried out for two open spots on a traveling competitive basketball team. She did a fabulous job at the tryout and was aptly rewarded. We got the good news today and I let Preston be the one to tell her.

As you can tell, she is excited. So far, we know she has tournaments May 25/26 and the first 3 weekends in June. The first and last ones are in Springfield. The first weekend of June is in Bloomington and the second weekend is in Decatur.
Posted by Unknown at 9:15 PM No comments: Links to this post